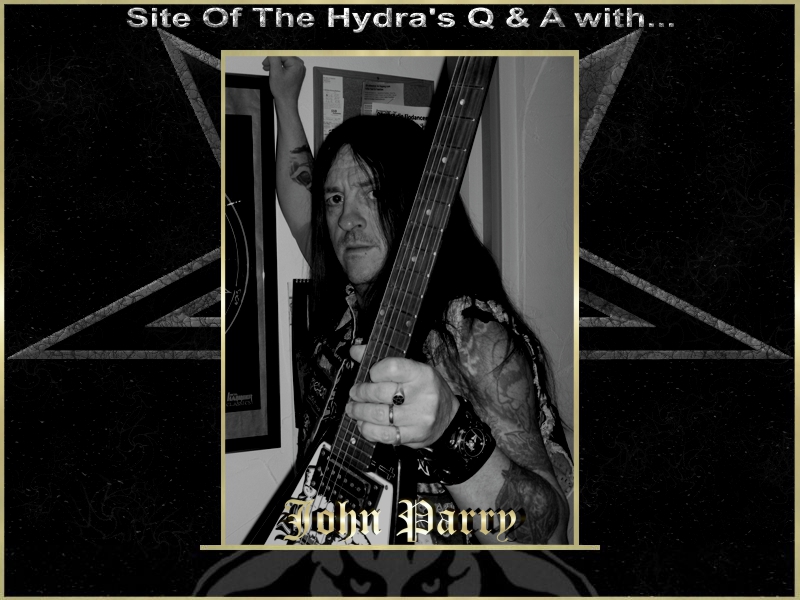 Site Of The Hydra Q & A with John Parry (Webmaster)

Site Of The Hydra: What was the first vinyl album you owned?

John Parry: AC/DC Back In Black

SOTH: What was the first Compact Disc you owned?

JP: VENOM Acid Queen. Bought it because it was VENOM, owned it for a long time before I actually owned a Compact Disc player!

SOTH: What was the first “name” band you seen in concert live?

JP: My parents took me to see the Irish Folk Band THE DUBLINERS when I was 4 years old. As for Rock music, DAVID BOWIE at Slane Castle in Ireland, 1987

SOTH: What is the greatest concert you have ever seen?

JP: VENOM at The Waldrock Festival in Holland 1995. It was so incredible to be there and witness MANTAS, ABADDON and CRONOS reunited, everything was just perfect!

SOTH: Name your Top Guitarists of all time.

SOTH: Name your Top Bassists of all time.

SOTH: Name your Top Drummers of all time.

SOTH: Name your Top Vocalists of all time.

SOTH: Name a band (or bands) that you would have liked to see live, but never did.

SOTH: Name 5 great albums from the 70’s that you still listen to often.

SOTH: Name 5 great albums from the 80’s that you still listen to often.

JP: VENOM Welcome To Hell, VENOM Black Metal, VENOM Possessed, AC/DC Back In Black, AC/DC For Those About Rock

SOTH: Name 5 great albums from the 90’s that you still listen to often.

SOTH: Which decade had the best Rock / Metal music?

SOTH: If you had to name the Top 5 Rock / Metal bands ever they would be…

SOTH: What Sports do you enjoy watching?

SOTH: Who are your sporting heroes?

SOTH: What type of Movies do you enjoy most?

JP: The Young Ones, Bottom, Father Ted, Only Fools and Horses, Robin of Sherwood

SOTH: Who would play you in the film of your life?

SOTH: What would your super power be?

SOTH: Who would you invite to your dream dinner party?

SOTH: How do you relax?

SOTH: What is the worst job you've done?

JP: Running an official VENOM forum while trying to cope with total insanity behind the scenes

SOTH: If you could own any car in the world it would be...?

JP: The General Lee from the Dukes Of Hazzard

SOTH: Do you have house pets?

JP: 3 cats and an aquarium full of fish

SOTH: If you could have a holiday home anywhere in the World, where would you have it?

JP: Near my homeplace in Donegal, and the South of Switzerland

SOTH: If a time machine is invented, which concert would you travel back to see?

SOTH: What song would you like played at your funeral?