In all the years that Site Of The Hydra has been online, we have shared the VENOM with you...

... and we aim to continue doing just that, by giving you the chance to WIN some Venomous goodies in our competitions. And here is the latest V giveaway: 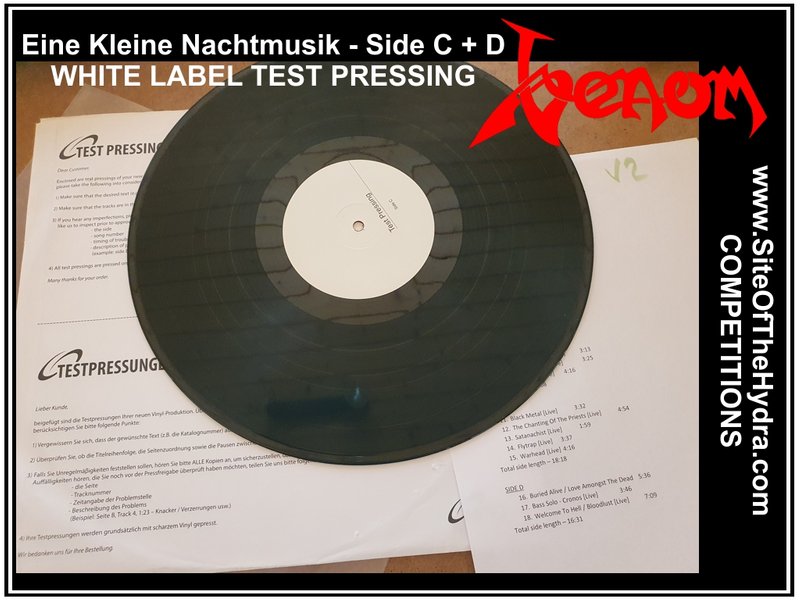 Alright Ye Legions – this time we have something rather special and very rare that one of you is going to win! But first, a little history…

Back in 2016, Eine Kleine Nachtmusik was re-issued on Transparent Red Vinyl. As usual, there was Test Pressings created on Black Vinyl. However, for some reason the Test Press for Side C and D was rejected, and a new Test Press was created for these Sides only…

So, pictured above is the Rejected version, and you have the chance to win it! There was 5 of these made in total, and were originally discarded and none were distributed. They were re-discovered last year. As we know who owns the other 4, we can safely say that you will probably never see another of these ever again, so this will be a RARE item indeed for the Lucky Legion Winner – Hell Yeah!

You can enter the competition once via E-mail. Please write Venom Test Press in the subject Field.

You can enter a second time by sharing the competition on Facebook:

When the competition closes, all the E-mails and Facebook shares will be numbered and we’ll get one of the VENOM Dudes to randomly select the winner.

There will be many more competitions coming in the future, both via this website and also exclusive competitions for the Deepest Hell members.

A special Thanx goes to The VENOM Legends who have contributed to the competitions by autographing the prizes - Hell Yeah!!

You can check out our previous competitions and winners by clicking the image below: