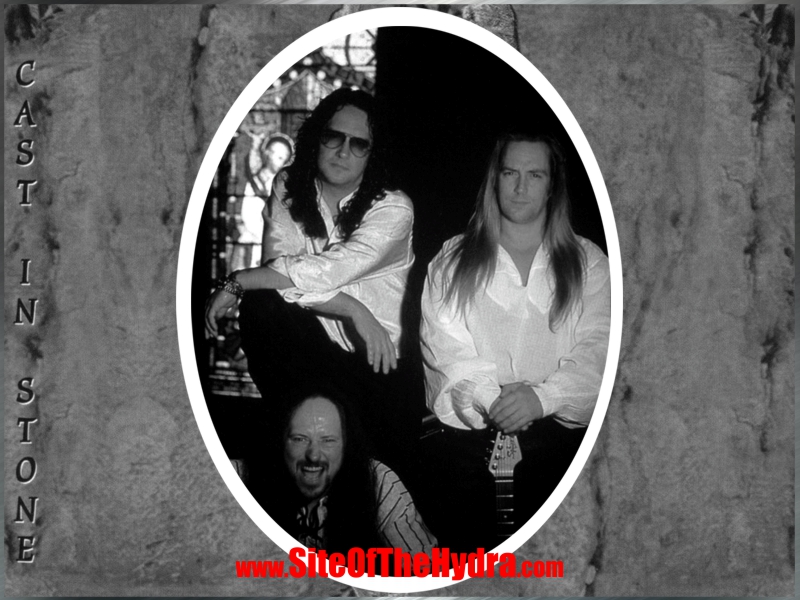 After the re-union of the classic VENOM line-up for 1995’s Waldrock Open Air Festival and Dynamo Open Air 1996 (both in Holland, and both absolutely brutally brilliant - still by far the 2 greatest concerts us Hydra's have ever attended), everything pointed towards a new studio album featuring MANTAS, ABADDON and CRONOS. They had already been in the studios to re-record a few classic VENOM songs for VENOM 96, a CD-ep which was released to celebrate the Dynamo appearance. This ep also featured a certain piece of brand new VENOM music, a shortened version of a song titled THE EVIL ONE (btw, they played the full version of THE EVIL ONE live at the Dynamo concert, and it was wonderfully received by the 100 000+ LEGIONS in attendance), serving as an unholy appetizer for what was going to be a 1997 studio album release....

CAST IN STONE was unleashed, and it was, and still is, an absolutely savage, classic VENOM album! From the moment MANTAS launches THE EVIL ONE, a heavenly Hell of awesome VENOM fire and power assault your very darkened soul. This album is so fuckin’ powerful it should carry a warning. The songs are sensational VENOM classics, and are further charged with what is one of the greatest and most powerful production sounds ever achieved. The outstanding music and production complement each other splendidly throughout, so the LEGIONS sure do get their Iron & Steel on CAST IN STONE!!

There are so many amazing songs on this album that it is impossible to find a weakness. Take any track and you get pure VENOM genius. Be it the snarling RAISED IN HELL, the atmospheric DESTROYED & DAMNED, or the almost industrial DOMUS MUNDI, it is hard ‘n’ heavy as fuck classic V!

The track FLIGHT OF THE HYDRA was put on a video that, unfortunately, has til this very day not been released, due to it being banned by television networks everywhere. It is rumoured that Sir JEFF of MANTAS is responsible, as he set up some effects on the video using very lifelike baby dolls...... But at least this song inspired the name of this humble website, ha!

KINGS OF EVIL is another track that has just got to be mentioned here, a sensational, though very simple and straightforward, VENOM-to-the-bone classic!!

As mentioned, all aspects of VENOMetal are covered on CAST IN STONE. You get your fast, slow and everything in between dose of V Mayhem. And the album closes off with a song called SWARM, which incorporates samples and terrific effects. It is almost like two separate songs, starting of with a snorting couple of verses and chorus, then changing to a wonderfully atmospheric, Egyptian-like feel, which in turn is smashed apart by MANTAS and ABADDON launching the song’s outro. SWARM is a song I would really have loved to have seen and heard played live. I can just imagine what the stage would have looked like... ka-fuckin’-boom!

CAST IN STONE ranks right up there, near to WELCOME TO HELL or BLACK METAL, true classic Metal perfection from what is undoubtedly the most awesome, groundbreaking band ever to create music. Lay Down Your Soul!!